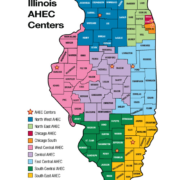 Established in 2010, the IL AHEC Network Program has eight regional centers throughout the state to serve both rural and urban underserved residents through access to health professions education, health careers development and community and public health promotion activities. The grant funding allows for the continuation and expansion of these programs, according to Hana Hinkle, PhD, associate director of the National Center for Rural Health Professions and the IL AHEC Network Program.

Serving the Entire State of Illinois

The renewed funding will allow expanded and enhanced education and training within the state’s communities, academic institutions and community-based organizations to increase the diversity and distribution of health professionals, promote healthcare quality and improve healthcare delivery to rural and underserved areas through the state.  The new Illinois AHEC Scholars Program, a competitive two-year cohort program that expands on traditional health professions and student education and training, was launched this year.

Through previous network efforts, more than 60,000 participants have been a part of Illinois AHEC-supported programs. The Illinois AHEC Network Program is part of the National AHEC Organization developed by Congress in 1971 to recruit, train and retain a health professions workforce committed to underserved populations.

This site uses cookies. By continuing to browse the site, you are agreeing to our use of cookies.

We may request cookies to be set on your device. We use cookies to let us know when you visit our websites, how you interact with us, to enrich your user experience, and to customize your relationship with our website.

Click on the different category headings to find out more. You can also change some of your preferences. Note that blocking some types of cookies may impact your experience on our websites and the services we are able to offer.

These cookies are strictly necessary to provide you with services available through our website and to use some of its features.

Because these cookies are strictly necessary to deliver the website, refuseing them will have impact how our site functions. You always can block or delete cookies by changing your browser settings and force blocking all cookies on this website. But this will always prompt you to accept/refuse cookies when revisiting our site.

We fully respect if you want to refuse cookies but to avoid asking you again and again kindly allow us to store a cookie for that. You are free to opt out any time or opt in for other cookies to get a better experience. If you refuse cookies we will remove all set cookies in our domain.

We provide you with a list of stored cookies on your computer in our domain so you can check what we stored. Due to security reasons we are not able to show or modify cookies from other domains. You can check these in your browser security settings.

We also use different external services like Google Webfonts, Google Maps, and external Video providers. Since these providers may collect personal data like your IP address we allow you to block them here. Please be aware that this might heavily reduce the functionality and appearance of our site. Changes will take effect once you reload the page.